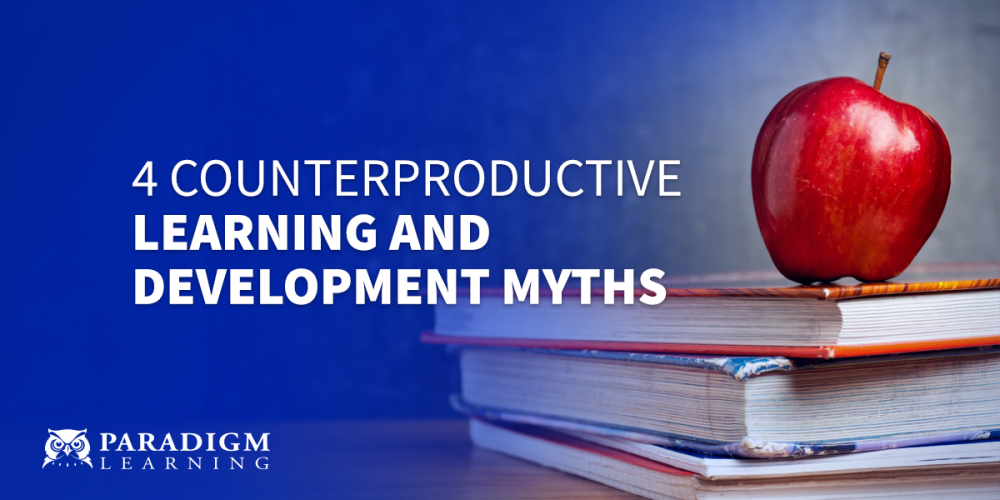 Posted by Paradigm Learning on September 20, 2018

Over time, smart people have made observations that allow us to understand the world better. Sometimes though, these observations and conclusions must be changed and refined. In my 5 years at Paradigm Learning, I’ve noticed 4 such examples of learning “myths.”

1. We Have Different Learning Styles

Neil Fleming is widely credited with popularizing the idea that learners have different styles. He was a school inspector and set out to understand how some teachers were able to reach each of his or her students. Fleming developed the 16-question VARK questionnaire, which could determine if a person was a Visual, Auditory, Reading, or Kinesthetic learner. The Atlantic suggested that this concept spread during the self-esteem movement of the 80’s and 90’s – if everyone was special, their learning styles must be, too.

The evidence is piling up against individual learning styles, though. A study in the Anatomical Sciences Education journal in 2018 found that after doing the VARK questionnaire, not only did students not study in ways that seemed to reflect their learning style, those who did tailor their studying to suit their style didn’t get better results on tests. The British Journal of Psychology published a study in 2017 which indicated that students who preferred learning visually thought they’d have an easier time recalling pictures. Naturally, those who preferred learning verbally thought they’d remember words better. Neither hypothesis proved true. Furthermore, a paper in the Journal of Educational Psychology from 2015 found no correlation between neither visual learners’ performance on reading comprehension tests nor auditory learners’ performance on listening-comprehension tests.

Learning seems to come down to student preference and ability, more than learning style.

In short, deliberate practice is certainly important and makes a difference; it’s just that the difference it can make has been overstated.

According to Wired, a popular theory for the genesis of the myth that we humans only use 10% of our brain was Lowell Thomas’s preface to How to Win Friends and Influence People by Dale Carnegie. He misquoted psychologist William James as saying that the average person “develops only 10 of his latent mental ability.” Apparently, James had actually said, “our latent mental energy.” Whatever the origin, it has been brought before us twice this decade at the box office: Limitless in 2011 and Lucy in 2014.

Modern brain scans show activity throughout our brains, even as we rest. Consider that even minor brain damage can have overwhelming effects. Amazingly, also according to Wired, when brain tissue designated for the use of a certain limb is rendered unnecessary by the loss of that limb, neighboring areas of the brain “recruit” that tissue for new functions.

Scientists still have a long way to go to understanding the brain, but this is one thing they do know: we use almost all our brain.

Like others on this list, the 70-20-10 rule has no clear starting point. Most sources do give credit to the Center for Creative Leadership and McCall, Lombardo, and Morrison. This concept indicates that about 70% of what we learn is from our job, 20% is from our boss and mentors, and 10% is from training. This idea makes intuitive sense based on how we spend our time, with the least amount of time spent in training and slightly more than that spent with leaders or mentors.

The 70-20-10 framework is not based on any study and should be regarded as a theoretical model only, which is why we’ve chosen to include it on our list of myths. Therefore, it becomes a myth if you treat it as fact. ATD suggests that it is the right training at the right time that will make the biggest difference.

As learning and development professionals, it is important that we nurture our own ability to learn – and in the case of learning myths, re-learn. Let’s not perpetuate the 10% brain myth at all. Let’s use the 10,000-hour rule and the 70-20-10 rule as frameworks and not hard-and-fast rules of thumb. Let’s make sure that learners know they may have preferred ways to learn or study, but that they have no specific learning style. They can learn in any number of ways.

See how Experiential Learning offers tangible and lasting knowledge gains in our eGuide.