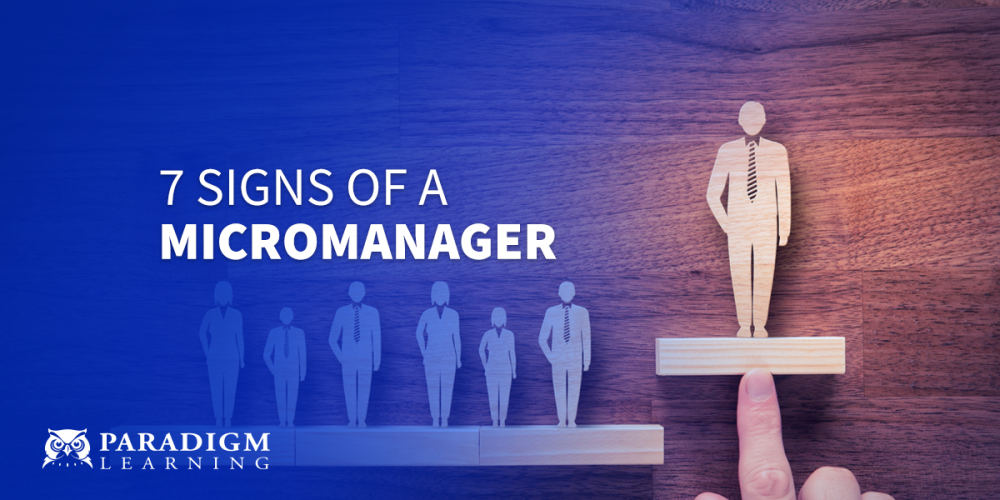 7 Signs of a Micromanager

In a previous column, Want a More Productive Team? Empower Them, we explored the dangerous consequences of micromanaging. It leads to morale and productivity declines and even increased turnover. No one likes working for one. Most people don’t intend to become one. Yet, according to a recent Accountemps survey, 59% of workers say they have first-hand experience with an overbearing boss.

That would seem to indicate a LOT of people are micromanaging and might not even know it.

1. You Feel Intense Reluctance to Delegate

If you want something done right, you gotta do it yourself, right? Um, wrong. Very wrong. If you have “too few” capable people, that’s a “you problem.” Hire better, train better, and most importantly trust more.

2. You Do All the Talking at Meetings

Good teams have complete engagement and participation. Strong leaders aren’t afraid to share the spotlight. Feel like you are droning on to a room full of semi-captive bodies? You probably are, and it’s limiting your team’s results.

Perhaps YOU are the slow-down, with all the checking-in and reporting required for every small task… If projects and team tasks are continually moving at a slow pace, micromanaging can often a root cause.

4. You Rarely Ask for Input

It’s a common mistake of insecure managers. “How can I be the boss if I don’t have the answers??” Push that fear aside. Great leaders value and respect the input of others. Credit and success aren’t finite, and the more diverse input a leader can gather, the better the results for everyone.

5. You Are CC’d on EVERY Email

Aim to have your team stop copying you on emails that don’t require your input or direct approval. This will cut down on the avalanche of time-sucking emails and allow you to focus on the issues that matter. Plus, there’s a good chance your employees resent being “monitored” on every correspondence. According to the American Journal of Experimental Psychology, employees who believe they are being watched tend to perform at a lower level.

Nothing stifles creativity like being over-instructed on every tiny detail of a project. Help your team understand the overarching goals, objectives, and time parameters – then let them use their skills and talents to achieve positive results.

I’ve had clients tell me they have a “turnover problem.” The truth is, most companies have a turnover SYMPTOM. According to SHRM, one of the most common reasons people quit a job is because they didn’t like their manager. People leave PEOPLE, not companies. If you are having trouble keeping top performers (especially if you notice people leaving for lateral moves or just quitting outright), micromanaging could be a big reason.

If any of the seven on the list hit close to home, don’t despair! Most micromanaging comes from a good place; caring deeply about the results and success of the team. Focus on empowering your team. Train and develop diligently and trust will follow. It’s much easier to delegate to a team you trust!