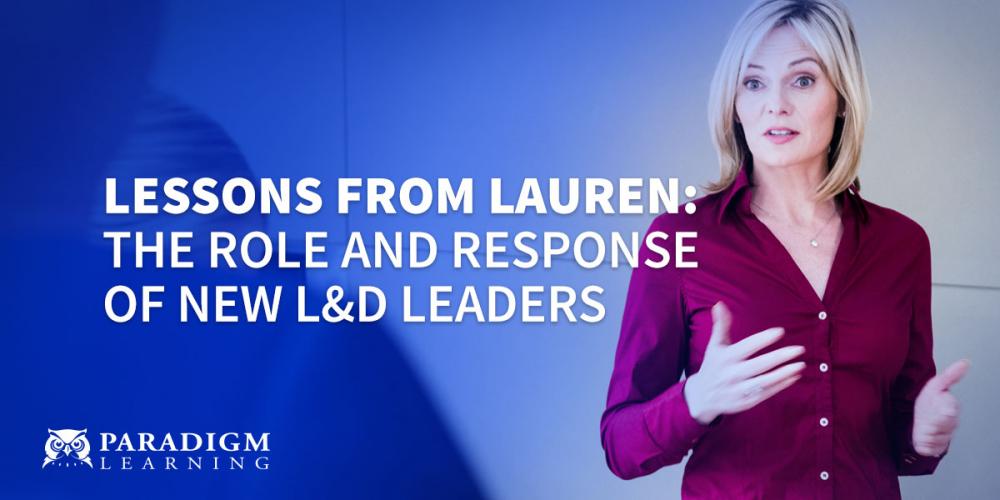 Lessons From Lauren: The Role and Response of New L&D Leaders

Posted by Paradigm Learning on January 19, 2017

Getting a new job can induce feelings of excitement, stress and a multitude of sensations, because those early days in your role are vital to success, both personally and organizationally. During the interview process, you agreed on responsibilities and priorities. In your first six months or so, your leaders will give you leeway to hash out how you want to attack them.

We oftentimes cross paths with clients during this time. And during this “honeymoon period” (as I call it), I’ve observed 3 early approaches to how contacts make changes as they see fit:

One Manager of Learning and Organizational Development at an e-commerce company had been there for a week when he called. His plan was to take their list of 88 training vendors and narrow it down to 10. (It’s worth noting that we weren’t on the list of 88!) He was then going to build leadership development from the ground up before the new year by creating a program for each leadership “turn”: individual contributor to supervisor/manager, manager to director, director to VP. Did I mention it was November when he called? Believe it or not, he succeeded in piloting the programs in January.

A Learning and Performance Manager at a large insurance company took over the position of a longtime contact of ours. I called to check in with her predecessor and found her in the role instead. This manager was happy to talk with me to set up a session for one of our simulations for the current cohorts. Her plan was to continue the high-potential programs (general, claims and underwriting) the way her predecessor had created them and evaluate as she went. Our session, the capstone, is this month (January 2017).

One Director of Learning took another approach when she stepped into a newly-created role. She looked at the descriptions and outlines of each program currently offered. She relied on intuition, stripping out and changing some programs immediately and observing and evaluating others. Since she had success with one of our simulations in a prior role, she’s decided one of the changes will be to pilot it in February 2017.

This client took a different approach when taking on their new roles. Upon reflection, I would say each approach depended on a combination of the strategic direction of the business and their personalities.

Which of these approaches most described your own method when ramping up your current role?