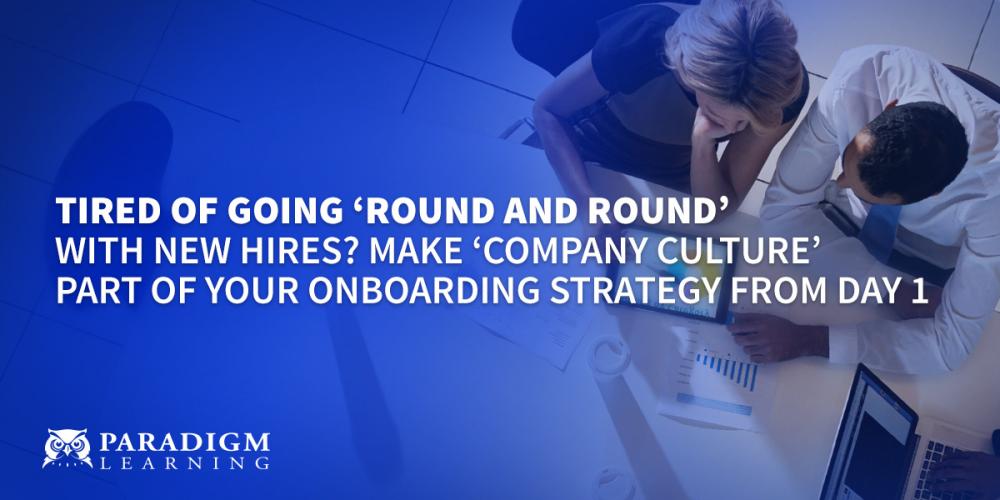 Tired of Going ‘Round and Round’ with New Hires? Make ‘Company Culture’ Part of your Onboarding Strategy from Day 1

It's one of those terms that has grown so common many business leaders merely accept it as one of those “necessary evils” of doing business. Yet, when you analyze it in regards to onboarding programs, it’s fair to say that the two words do not belong together in the first place. After all, why should joining a new company be a shock to anyone’s system? Unfortunately, that’s precisely what happens for many new employees as they work to assimilate themselves on the job.

If they stay on the job at all.

According to various industry sources, up to 20 percent of employee turnover happens within the first 45 days, but that’s not even the worst of it. A piece published on clickboarding.com asserts that nearly a third of new hires start planning an exit strategy within their first six months on the job – nearly a quarter of them finding success elsewhere before their first anniversary.

You don’t have to be an expert to know that kind of trend only leads to financial uncertainty and misfortune. Yet, there is nothing written in stone that says any organization is doomed to such a destiny; rather, the writing on the wall can be very different – if executive leadership adopts an onboarding strategy that makes company culture less ominous and more welcoming to new employees.

The big picture can literally mean painting a BIG PICTURE.

More encouraging statistics show that companies which incorporate larger cultural components into their onboarding efforts achieve greater levels of acceptance and understanding in new hires. One recent study reported that in cases where employees had great onboarding experiences, nearly 70 percent remained onboard three years later; another study conducted by The Wynhurst Group identified the figure at 58 percent.

The logic is simple: onboarding is vital in teaching new hires about the mission, vision, values, and culture of an organization. Proper onboarding ensures that new employees fully understand their roles and how they relate to big picture operations.

Business leaders who work to transform adequate onboarding experiences into outstanding, jaw-dropping ones are more likely to not only attract top-tier talent, but also retain their services over a longer period. Using interactive platforms and visual methodologies are proven methods for boosting knowledge and engagement, but they need to present at the start of process to be game-changers.

Appealing to the hearts and minds of new employees is big picture thinking at its best. Onboarding solutions that drive alignment between culture and strategy break down barriers among staff members, improve time-to-productivity ratios, and enhance alignment across the enterprise.

The right words alone don’t always work, but we can help you draw-up the vision that will.

Searching for a new hire can be a challenging and seemingly futile task. The tal...

The internet is filled with "listicles" explaining the best, easiest or cheapest...

This past Sunday, as with every Sunday, I found myself craving an original chick...